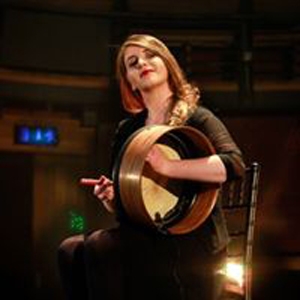 The promise shown by acclaimed bodhrán player Aimee Farrell Courtney’s debut performance in Dublin’s National Concert Hall at the tender age of eight was quickly realised when she won Gael Linn’s Siansa, in 2005 and 2006 followed by The World Bodhrán Championship in 2010. Aimee’s dynamic playing ranges from her renowned sensitive style of accompaniment to electrifying rhythmic solos and duets.
Aimée holds a Bachelor of Music degree from TUDublin Conservatory of Music and Drama, specialising in Irish Traditional Music and a Masters degree in Performance. Graduating with First Class Honours, Aimée was also awarded the Leo Rowsome Gold Medal for Outstanding Traditional Performance and the Michael McNamara Gold Medal for Outstanding Overall Performance.
She has gone on to perform with Irish folk luminaries such as Dónal Lunny, Andy Irvine and Liam O’Flynn, tour with bands such as Danú and Cara performing in venues such as The 3 Arena (Dublin), The Royal Albert Hall (London) and The Hermitage Theatre (Russia) to name but a few. She is now on the road to discover the possibilities of the bodhrán in other music performing with the RTÉ Concert Orchestra, Savannah Philharmonic Chorus and The Hong Kong Academy of Performing Arts. Collaborative projects have resulted in albums Roots Revival Romania Chapter One:Maramures, Chatham Saxophone Quartet New Irish Music and more recently New Airs with the RTÉ Contempo Quartet.
Aimée’s love of music is evident in her teaching. Her in-depth knowledge of the instrument has led her to conduct specialised workshops across Ireland, Europe, and Canada. In 2012 she devised a music education programme for primary school level and is guest tutor in Champlain College Dublin, World Academy of Irish Music and Dance University of Limerick, Newcastle University (U.K.) and The Gaelic College (Canada).
Aimée founded the Traddrum Clinic in 2016, Ireland’s first and only percussion clinic dedicated to the bodhrán. Traddrum Clinic 2020 will see the introduction of online participants.