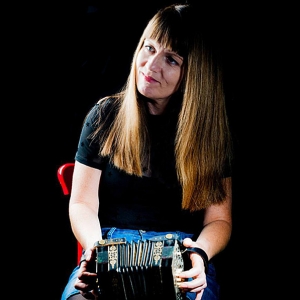 Brenda Castles comes from a rich tradition of music in Co. Meath, having learned concertina from Rena Traynor (née Crotty) and concertina maestro, Mícheál Ó’Raghallaigh. She has several All Ireland Fleadh titles to her name both in solo and group competitions and was a finalist in the Young Traditional Musician of the Year award (sponsored by IMRO and Irish national broadcaster, RTÉ).
Her music has featured on radio and television programmes for the national broadcaster RTÉ including Céilí House, The Late Late Show, Ceol Binn Ó Na Beanna, Fleadh Cheoil, TG4’s HUP!, Late Date and on The Rolling Wave. In 2013 she worked on a show called Glaoch an Cheoil for TG4.

Brenda is currently based between Dublin and New York, where she regularly performs and teaches music. She released her debut solo album, ‘Indeedin You Needn’t Bother’ in December of 2016. She teaches classes around the world and in 2020 she’ll be teaching at Irish music festivals and arts events across America. She’s been a performer in two Celtic Sojourn productions in the Boston area and she joined the Green Fields of America collective for concerts throughout 2016-2020.