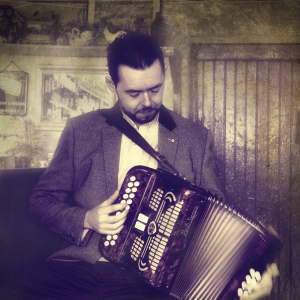 Described by legendary accordion player Joe Burke as a ‘master musician’, Daithí Gormley is widely regarded as one of the most accomplished Button Accordion players of his generation with an extensive and much respected repertoire steeped in the rich musical heritage of his native county Sligo. He is a regular performer on Irish radio and television and has performed at festivals and concerts nationally and internationally. He has researched, published, and lectured on Irish traditional music and is in high demand as an accomplished tutor, lecturer, and performer. In November 2017 Daithí and Sligo fiddler Oisín MacDiarmada published the ‘Fiddlers of Sligo Tunebook’ and in April 2018 Daithí released his, much anticipated, debut solo album ‘Fiddling without a Bow’ – Irish Traditional Music on Button Accordion to wide critical acclaim. In addition to being an outstanding performer, Daithí is also in high demand as an accomplished tutor teaching widely at many festivals and summer schools nationally and internationally, including the South Sligo Summer School, Joe Mooney Summer School, Ceardlann Earraigh, Birmingham Trad Fest, New York Trad Fest, Return to Camden Town Festival and Scoil Egise to name but a few