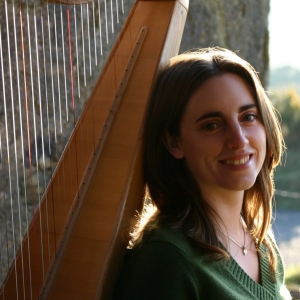 Gráinne Hambly from County Mayo, Ireland is an internationally recognised exponent of the Irish harp, and is in great demand as a performer and teacher, both at home and abroad. Gráinne started to play Irish music on tin whistle at an early age, before moving on to the concertina and later the harp. She completed a Masters Degree in Musicology, awarded by Queen’s University Belfast (1999) followed by the Graduate Diploma in Education (Music) at the University of Limerick.

Gráinne has been playing professionally for the past 20 years, and has performed on various occasions in Germany, France, Italy, Switzerland, Brazil, Colombia, Israel, and Japan, as well as touring extensively in the United States, giving concerts, workshops and masterclasses. She specialises in teaching Irish traditional music ‘by ear’ and offers private lessons and intensive tuition options at her home, as well as teaching at various annual summer schools and harp festivals.

Gráinne has featured on a number of recordings both as guest artist and accompanist. She has released three critically acclaimed solo CDs, and two books of arrangements. Her most recent collaboration is with Scottish harper William Jackson, with whom she has released a recording and published arrangements for harp ensemble.