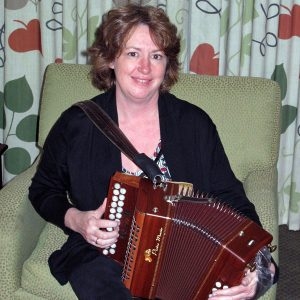 Patty Furlong, originally from Bronx, New York, plays the Irish button accordion in the key of C#/D and B/C. In her teen-age years, as a student of Martin Mulvihill, Patty won numerous New York titles as well as All-Ireland titles. She has played with the world renown group “The Chieftains” as well as being an original member of “Cherish the Ladies”. Patty and members of her band “Coolmagort” have performed throughout the U.S., Canada, Bermuda, and Ireland. Her 1st solo recording “Patty Furlong – Traditional Irish Music on Button Accordion” was named one of the top recordings in 1999 by the Irish Voice. She is scheduled to release a new CD with Sean Quinn. Patty is certified as a traditional Irish music teacher by CCE – music organization in Dublin, Ireland. She teaches weekly to young students and has taught previously at the O’Flaherty Irish Music Retreat and other music camps including Swannanoah Arts Week, Augusta Heritage Center, and Catskills Irish Arts Week.