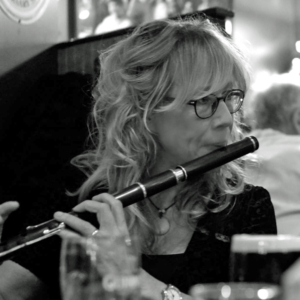 Tina Eck plays the Irish wooden flute and tinwhistle.  Originally from Germany and now working as a Washington-based radio news correspondent, she discovered her passion for Irish traditional music in a local pub in Washington DC in the 1990’s. She has since performed at countless sessions, festivals, dances and concerts, including such notable venues as the Irish Embassy, Strathmore Hall and the Kennedy Center Concert Hall. She has traveled to Ireland frequently and has learned technique and repertoire from some of the best traditional flute players in Ireland and the U.S.  She is on the faculty of the Washington Conservatory of Music program at Glen Echo Park, and she also gives private flute and whistle lessons.  In 2011 Tina was awarded a Maryland State Arts Council Grant for Solo World Music Performance. Tina also holds a 2013 TTCT Teaching Diploma by Comhaltas Ceoltoiri Eireann (Dublin), identifying her as one of the premier teachers of Irish traditional music. Tina performs with the duo Lilt, the dance band Rambling House and the Irish Inn Mates.